What is the bass wolf tone?

The wolf tone is the behavior of a bowed string, in which the string tends to stutter. The sound seems to be repeatedly cancelled and reinforced. This is actually the result of two different vibrations in the bass that don't interact in a desired way.

The bowed string vibration follows a pattern described as the Helmholtz bowed string motion. You can find nice videos of this online. The string has something described as a kink that travels up to the nut, then reflects and returns down the other side to reflect at the bridge back to the other side. For most of the time, the bow hair is in contact with the string. But as the kink gets back down to the bridge, the hair slips (loses contact with the string) until after it reflects and the hair catches again after the reflection.

For most bowed notes, this bowed string motion works just great. However, the body of the bass itself has its own ways of moving. This motion of the body is dependent on frequency. When recorded by a mic, we generally set up a spectrum chart, which shows the loudness produced by the instrument for each frequency. These spectra are normally not very even, but have peaks and valleys all the way up through the frequency band. Here is an example of a spectrum for bridge admittance:

The wolf tends to appear when there is a very high peak in this spectrum. You might think of this as a case where the instrument tries to generate more output than it reliably can.

Now, as the instrument is vibrating, the bridge is vibrating along with it, pushing it back and forth. However, recall that this Helmholtz string motion has this reflection at the bridge, in which the string flips from one side to the other. So we have both the instrument body and the string trying to move the bridge. But if the body is pushing it one way and the string the other, they tend to cancel. As the string continues, it may then push it in the same direction as the body, which reinforces it. As this continues to happen in alternation, you end up with the stuttering effect of the wolf.

What can be done?

What we'd like to do is lower that high peak of the loudness spectrum. You don't want to lower the entire spectrum, as that will mean that you have simply muted the entire instrument. You want to get at that one frequency area that is causing the problem.

I'll first check to see if the wolf is only up around the octave on the A string. If it is also wolfy on the D string (at the same note) and the G string (again at the same note), then I'll try adjusting the sound post or, perhaps, see if it is a bit loose. The post adjustment can change the body vibration, of course.

If I only get the wolf on the A string, I'll come at it from another direction. You can either a) use a tuned resonator at the wolf frequency or b) try to modify the vibration of the plate itself.

This latter adjustment may be done by removing the plate and changing thicknesses, but that's fairly radical for most cases, and you want to know where to add/remove mass to make the desired change. The problem is that such changes are likely to change the vibration at other frequencies and you'd want to avoid undesirable effects, of course.

There are also magnets or other devices that can be attached to the top plate, usually in the lower bass section outside the bassbar. These can change the mass placement enough to lower that peak. But, here adding the mass can have other effects on the spectrum that can be difficult to predict.

For a tuned resonator, what I want to do is to have something on the instrument that will vibrate at the wolf frequency, but not generate sound output (i.e. absorb energy). This will effectively lower the loudness peak, though the instrument will still have the same kind of energy at that frequency, while producing less sound there. If isolated near that one frequency, it should not mute the instrument.

It may be worth trying an afterlength wolf suppressor, which is attached on a string between the bridge and tailpiece. These are available in various designs  LupX button style, New Harmony design, or cylindrical with a rubber insert. Here we're concerned with motion of the section between the bridge and the saddle at the top of the tailpiece, with that suppressor mass attached (not the pitches of the string sections above or below the suppressor). That unit as a whole will have a frequency that we'd like to match to the wolf note. 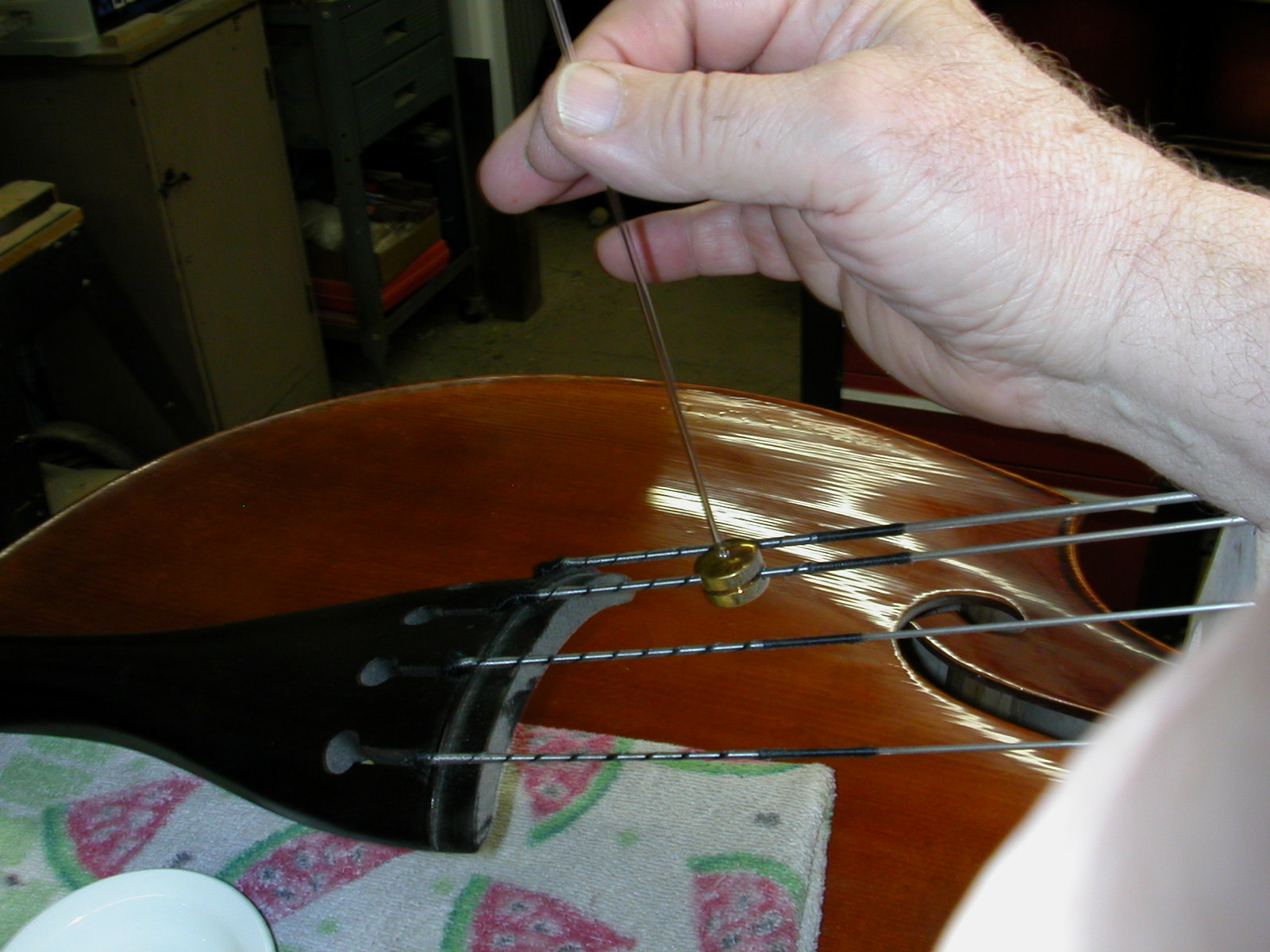 What you don't want to do is just slide the suppressor around until the bass sounds better. And it's also not a case of using more mass to get rid of a bad wolf. You really want to tune this system to the actual wolf note (or very close to it). I also want to note that, since we're just trying to set up a system with the right frequency, you can actually put the suppressor on the afterlength of any of the strings, provided you get the right pitch.

It can be difficult to hear the frequency if you just pluck on the suppressor. You'll hear an indistinct thud, though part of it will be the right pitch. You can also try bowing right on the suppressor itself, but they tend to spin and are still hard to hear.

For this purpose, acousticians have used a thin glass tube, which they refer to as a Fuhr tube (named after a scientist by that name). For bass we use just a 2mm thin glass capillary tube, 6 inches in length, available from scientific supply houses (ordering information below). With just a little water on the fingers, you place one end on the suppressor, then slide your fingers downward on the tube. You'll feel a little skipping on your fingers, and the pitch of the suppressor generally comes out loud and clear. (It's quite like spinning your moistened finger around a wine glass, and hearing the resonant frequency of the glass.) With just very little practice one finds this quite easy to do, and it is a very effective way to tune the suppressor.

For a given mass, it should have its lowest pitch when centered between the bridge and tailpiece. If we move it either way, the pitch will rise. What I don't want to do is get into an adjustment that shifts the suppressor close enough to the bridge that it would act as a mute on the sound. If you need a higher pitch, it's better to go with a lighter mass suppressor.

In order to better understand, I've recorded a video and uploaded it to YouTube so you can get a better idea of how this works. The link for this is https://www.youtube.com/watch?v=kqz4iqEfxEA

To fine-tune the adjustment, play the bass and check the wolf, shift the suppressor, play, shift, etc. In some cases, when the suppressor frequency is at the wolf frequency, it may reduce the wolf stutter to a tolerable level. However, in more fussy cases, as you get close to the wolf frequency, the wolf may actually shift, rather than disappear. However, if you are able to shift a bad wolf away from A and shift it to A#, that may be the best you can do with this method.

It may be possible to use the tailpiece as a vibrating mass, and tune one of its modes to the wolf note. This could be done by shortening or lengthening the tailwire. Or you could try a lighter/heavier tailpiece. But as weather changes, you may have to adjust this, and that may not be so easy to do, since you may have to loosen all the strings to do so. (Incidentally, the Fuhr tube can be of assistance in tuning the tailpiece as well.)

But I have generally found that the afterlength suppressors can do a pretty good job on many basses. And it's helpful to use the Fuhr tube so that you know if the suppressor is in a good place to help with the problem.

These are available at scientific supply houses. While we call them Fuhr tubes for use in acoustics, they would refer to them as "glass capillary tubes," but be sure to order them without filaments. 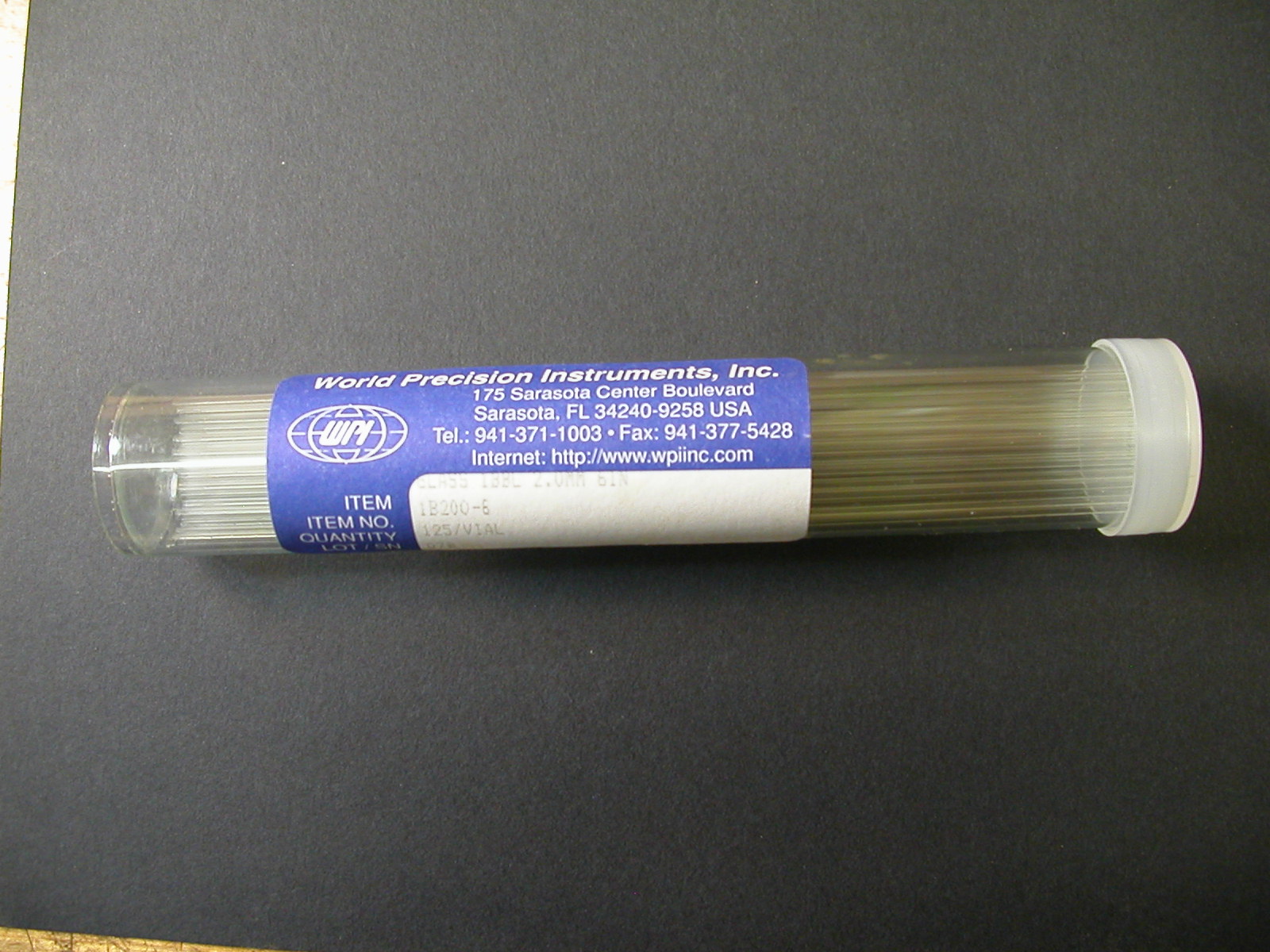